What is Scripting Language 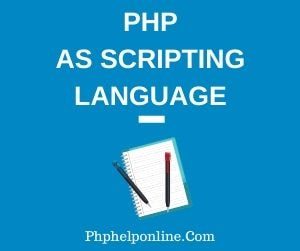 Script language are used to interpret script at runtime. The main purpose of scripting language is to enhance the performance of application. There were two types of scripts in domain of web development, server has interpreted server side script while for client side which is user friendly is interpreted on client side application that is HTML. The code PHP script is executed without need of compiling

Originally it was designed to developed websites which have dynamically contents. It is mainly a server side scripting. It has also frameworks of software for building blocks and design structure to enhance the rapid application development of system. Now, PHP is used in more than third percentile of websites across the internet.PHP works on all server by default as it mentioned before. This a system or operating system where web application is deployed and all the user can access it from anywhere of the world using its static internet protocol. Database is a part of web applications whose content are dynamically changed. So. Database is also main component of PHP. There are many database available which you can integrate with PHP. Database is also installed on the server for these applications.The fact that PHP can be combine with HTML to use the language easily understand by beginners in programming, unlike languages JAVA and C, which use complex functions to make  an HTML page. So, PHP offers a countless options, from the development of simple sites to much more complex systems, such as virtual stores and online management platforms.