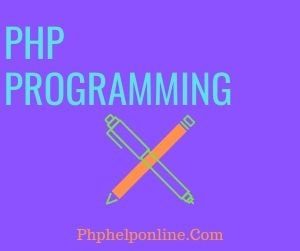 The programming language Hypertext Preprocessor (PHP) with its old name Personal Home Page, which is a server side scripting language. Used by the developers who can connect database with their webpage to show dynamic web contents. It can be interpreted on server which have PHP installed. It is used by the student who can developed web sites to solve the problems. It can communicate with HTML, database, and also create E-commerce websites.

What is Scripting Language?

Script language are used to interpret script at runtime. The main purpose of scripting language is to enhance the performance of application. There were two types of scripts in domain of web development, server has interpreted server side script while for client side which is user friendly is interpreted on client side application that is HTML. The code PHP script is executed without need of compiling

Why we Use PHP?

There are numbers of programming languages PHP is among one of them. It has many advantages to use it in our web development. Such as some of them describe as follow:

Originally it was designed to developed websites which have dynamically contents. It is mainly a server side scripting. It has also frameworks of software for building blocks and design structure to enhance the rapid application development of system. Now, PHP is used in more than third percentile of websites across the internet.

Today, there are millions of website and applications exists on internet which are developed from scripting language PHP. There are easy integration of PHP with HTML, MySQL, and Server and in form of learning it is easy to learn and understand as compared to different scripting language to control websites dynamically. For web industry it is language which is most popular or commonly used. Using PHP in our web applications has many benefits.

There are so many versions are introduced from starting till today the first version is developed in 1995 known as personal home page. Now the latest version is used flexible heredoc and newdoc syntax and released in 2018.

There are mainly five characteristics which differentiate PHP from other languages these are as follows:

Most of applications is developed on PHP due to widely used for web applications. The most common are listed here:

To developed webpages three main components of it to be installed on your system. These PHP contents will flow the data or control the information over the server and display the relevant content on the web server for the user who can access these pages. Following are main components of webpage PHP:

PHP works on all server by default as it mentioned before. This a system or operating system where web application is deployed and all the user can access it from anywhere of the world using its static internet protocol.

Parser is required to parse PHP script to generate the desired HTML output that can be view on web browser.

Object oriented functionally are introduced in PHP to help the programmers to use language. It helps to keep the code according to DRY principle Don’t Repeat Yourself and make code easier to modify, maintain and debug. We can create classes and define functions in PHP

The installation of PHP is not difficult if you are new to this. You can create your system as your server, for this first you have to install a webserver, PHP, and database which you have required from databases.

PHP is begin with “<?php ?>” this tag. All the code of it lies between in this tag and script can placed anywhere in the document. The extension of it is “.php”. Each statement of PHP scripts end with a semicolon “;” In PHP, keywords and functions are not case sensitive while variables are case sensitive.

We can also give comments in the script these are not treated or executed it helps the reader or programmer to understand the code or even programmer too who did this code.

Syntax of PHP is very similar to C language syntax style. The loops, conditions, functions are similar with it. Data type, functions, PHP objects all we can do in PHP if we know the concepts of programming and some basic information and rules to code in C Language.

Due tom open source of PHP there exist a number of chances to enhance the functionality of PHP. It also use extensions of C language to add in PHP language. There are numbers of extension available to support your required application programming interface.PHP use extensions which created in a languages of high-level and compiled into PHP extensions.

PHP with Other Language:

The fact that PHP can be combine with HTML to use the language easilyunderstand by beginners in programming, unlike languages JAVA and C, which use complex functions to make an HTML page. So, PHP offers a countless options, from the development of simple sites to much more complex systems, such as virtual stores and online management platforms.